The Irish Wolfhound is considered to be one, if not, the tallest breed of dog to ever exist that is still around today. These dogs, when fully grown, are known to grow to about the size of a small pony when on all fours, and can reach to about 7 feet tall when they stand on their hind legs that is as tall as a professional basketball player!

But while their height and wolfish appearance will undoubtedly scare off most people (including would-be burglars and thieves alike), they are not as menacing as people attribute them to their size these dogs are really friendly dogs in reality, always aiming to please their owners because of their sweet temperament, and would often greet strangers rather than scare them off (though nine times out of ten, their sheer size would really have strangers running for their lives!).

Taking care of one’s Irish wolfhound puppy is a tall challenge. Owners need to know that the Irish wolfhound puppy will eventually grow into a very tall and large dog. That being said, tending to one’s Irish wolfhound puppy requires patience as well as strict adherence to their dog’s needs. An Irish wolfhound puppy’s nutrition, for instance, requires its owner to feed it food that is of good quality, since these dogs grow remarkably fast, around a year or two, and the food it eats will greatly affect how tall and large it grows. Training one’s Irish wolfhound puppy at an early age is also a very wise and prudent move instilling what orders and actions the owner wants of his or her dog at this stage of their lives will let the dogs be less of a challenge to take care of as it grows older; it also fosters a bond between owner and dog that tells the dog that its owner is the master and should be followed and be shown respect. That being said, one should also respect the dog with positive reinforcement: most dogs shown a more positive demeanors, being easier to train when enforced with praise and treats, rather than punishment.

The Irish wolfhound is a handful to take care, to say the least. But if one gives the proper time and patience in raising them, these dogs will pay dividends and be one of the best canine companions one can ever hope and or dream for! 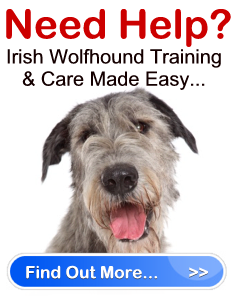